T’was a man of youthful feature

The Ballad of Casey Deiss

In his life, he spoke but rarely
In his mind he cried for light
Painting perceptions trying to capture
That which he saw in his questioning strife

Once in Lisbon, twice in London
Travelling around for all of his time
Looking for and finding a goddess
He took Diana to be his wife

Of the children, they’d begotten
Two had died without knowing life
And the third I know not whereof
But if she lives, she will yet be kind

Wednesday of the Second Week of Lent

1 The whole community of Israelites left the desert of Sin, travelling by stages as Yahweh ordered. They pitched camp at Rephidim where there was no water for the people to drink.

2 The people took issue with Moses for this and said, “Give us water to drink.”
Moses replied, “Why take issue with me? Why do you put Yahweh to the test?”

3 But tormented by thirst, the people complained to Moses. “Why did you bring us out of Egypt,” they said, “only to make us, our children and our livestock, die of thirst?”

4 Moses appealed to Yahweh for help. “How am I to deal with this people?” he said. “Any moment now they will stone me!”

5 Yahweh then said to Moses: “Go on ahead of the people, taking some of the elders of Israel with you; in your hand take the staff with which you struck the River, and go.

6 I shall be waiting for you there on the rock (at Horeb). Strike the rock, and water will come out for the people to drink.” This was what Moses did, with the elders of Israel looking on.

7 He gave the place the names Massah and Meribah because of the Israelites’ contentiousness and because they put Yahweh to the test by saying: “Is Yahweh with us, or not?”

8 The Amalekites then came and attacked Israel at Rephidim.

9 Moses said to Joshua: “Pick some men and tomorrow morning go out and engage Amalek. I, for my part, shall take my stand on the hilltop with the staff of God in my hand.”

10 Joshua did as Moses had told him and went out to engage Amalek, while Moses, Aaron and Hur went up to the top of the hill.

12 But Moses’ arms grew heavy, so they took a stone and put it under him and on this he sat, with Aaron and Hur supporting his arms on each side. Thus his arms remained unwavering till sunset,

13 and Joshua defeated Amalek, putting their people to the sword.

14 Yahweh then said to Moses: “Write this down in a book to commemorate it, and repeat it over to Joshua, for I shall blot out all memory of Amalek under heaven.”

15 Moses then built an altar and named it Yahweh-Nissi

16 meaning: “Lay hold of Yahweh’s banner! Yahweh will be at war with Amalek generation after generation.”

There are several legends concerning the origin of Taps. The most widely circulated one states that a Union Army infantry officer, whose name often is given as Captain Robert Ellicombe, first ordered Taps performed at the funeral of his son, a Confederate soldier killed during the Peninsula Campaign. This apocryphal story claims that Ellicombe found the tune in the pocket of his son’s clothing and performed it to honor his memory.

The Seven Days Battles were a series of six major battles over the seven days from June 25 to July 1, 1862, near Richmond, Virginia, during the American Civil War. Confederate General Robert E. Lee drove the invading Union Army of the Potomac, commanded by Maj. Gen. George B. McClellan, away from Richmond and into a retreat down the Virginia Peninsula. The series of battles was the culmination of the Peninsula Campaign.

The Seven Days began on Wednesday, June 25, 1862, with a Union attack in the minor Battle of Oak Grove, but McClellan quickly lost the initiative as Lee began a series of attacks at Beaver Dam Creek (Mechanicsville) on June 26, Gaines’s Mill on June 27, the minor actions at Garnett’s and Golding’s Farm on June 27 and 28, and the attack on the Union rear guard at Savage’s Station on June 29. McClellan’s Army of the Potomac continued its retreat toward the safety of Harrison’s Landing on the James River. Lee’s final opportunity to intercept the Union Army was at the Battle of Glendale on June 30, but poorly executed orders allowed his enemy to escape to a strong defensive position on Malvern Hill. At the Battle of Malvern Hill on July 1, Lee launched futile frontal assaults and suffered heavy casualties in the face of strong infantry and artillery defenses.

The Seven Days ended with McClellan’s army in relative safety next to the James River, having suffered almost 16,000 casualties during the retreat. Lee’s army, which had been on the offensive during the Seven Days, lost over 20,000. As Lee became convinced that McClellan would not resume his threat against Richmond, he moved north for the Northern Virginia Campaign and the Maryland Campaign.

Day is done, gone the sun
From the lakes, from the hills, from the sky
All is well, safely rest
God is nigh.

Fading light dims the sight
And a star gems the sky, gleaming bright
From afar, drawing near
Falls the night.

VENOSA, ABBEY OF THE SANTISSIMA TRINITÀ

The Abbey of the Santissima Trinità or Abbey of the Most Holy Trinity is a Roman Catholic abbey complex at Venosa, in the Vulture area of the province of Potenza, in the southern Italian region of Basilicata. The architecture of the abbey shows Roman, Lombard, and Norman influences.

The complex lies within the Parco Archeologico (“archaeological park”) of Venosa, approximately 1.5 km north-east of the town; it falls under the Roman Catholic Diocese of Melfi-Rapolla-Venosa. It consists of the old church, of uncertain date; the monastery buildings; and the Incompiuta, the unfinished or new church, begun in the last quarter of the 11th century and never completed. The complex was declared a National Monument by Royal Decree on 20 November 1897. 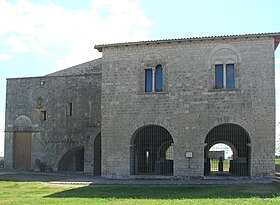 The date of construction of the monastery is unknown; some elements may date from the 8th century. A foundation date of 954 AD is documented in the spurious Chronicon Cavense of the forger, scholar and priest Francesco Maria Pratilli (1689–1763).

Following the Council of Melfi in 1059, the church was transformed from a cathedral to an abbey by a bull of Pope Nicholas II, and the number of monks increased from 20 to 100.

In the same year he invested Robert Guiscard as Duke of Puglia and Calabria, and Guiscard made the abbey the religious centre of his domain.

Most of the story of John of Matha’s life is based on legends that circulated after his death. It is reasonably certain that he was born to noble parents at Faucon-de-Barcelonnette, on the borders of Provence on 1169, June 23. He was baptized John, in honour of St. John the Baptist. His father Euphemius sent him to Aix, where he learned grammar, fencing, riding, and other exercises fit for a young nobleman. It is said that while there he gave the poor a considerable part of the money his parents sent him, and he visited the hospital every Friday, assisting the sick poor.

He studied theology at the University of Paris and was ordained a priest at the age of 32 in December 1192. According to Trintarian tradition, on 1193, January 28. , John celebrated his first Mass. During that Mass, he was struck with a vision of Christ holding by the hand two chained captives, one a Moor, the other a Christian (the Crusades were in full force at the time). The Christian captive carried a staff with a red and blue cross. After the Mass, John decided to devote himself to the task of ransoming Christian captives from the Moors. Before entering upon this work, he thought it needful to spend some time in retirement, prayer, and mortification; and having heard of a holy hermit, St. Felix of Valois, living in a great wood near Gandelu, in the diocese of Meux, he repaired to him and requested him to instruct him in the practice of perfection.

One day while walking with Felix, John had another vision – a white stag appeared at a stream with a red and blue cross between its antlers. John disclosed to Felix the design he had conceived on the day on which he said his first mass, to succour captive Christians under slavery, and Felix offered his help in carrying it out. They set out for Rome in the midst of a severe winter, towards the end of the year 1197, to obtain the pope’s benediction.

On 1198, December 17, he obtained the preliminary approval of Pope Innocent III for a new order dedicated in honour of the Blessed Trinity for the redemption of Christian captives.

St. John founded the Trinitarians to go to the slave markets, buy the Christian slaves and set them free. To carry out this plan, the Trinitarians needed large amounts of money. So, they placed their fund-raising efforts under the patronage of Mary. In gratitude for her assistance, St. John of Matha honored Mary with the title of Our Lady of Good Remedy. Devotion to Mary under this ancient title is widely known in Europe and Latin America, and the Church celebrates her feast day on October 8. Our Lady of Good Remedy is often depicted as the Virgin Mary handing a bag of money to St. John of Matha.

This order was fully approved in 1209. The Order of the Most Holy Trinity’s first monastery was established at Cerfroid (just north of Paris) and the second at Rome at the church of San Tommaso in Formis. Christian slaves were first rescued by the Order in 1201. In 1202 and 1210 John travelled to Tunisia himself and brought back countless Christian slaves.

Before his death, Trinitarian tradition says he met St. Francis of Assisi and introduced Francis to the Frangipani family, one of the benefactors of the Franciscan order. St. John of Matha died on 1213, December 17, in Rome in the house of St. Thomas In Formis on the Caelian Hill.

In 1655, his relics were transferred from Rome to Madrid. His cultus was approved in 1665 and his feast day is December 17.